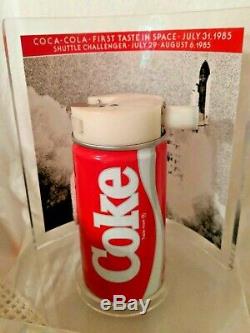 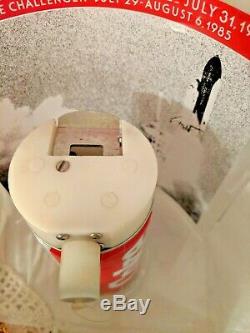 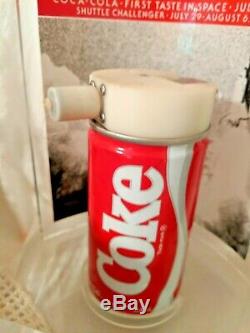 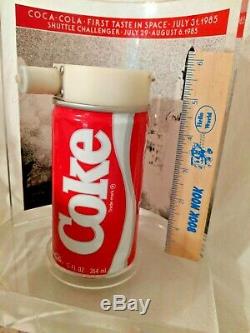 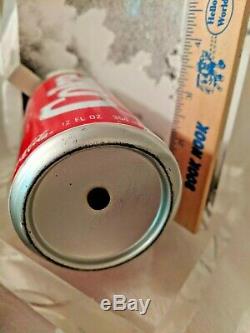 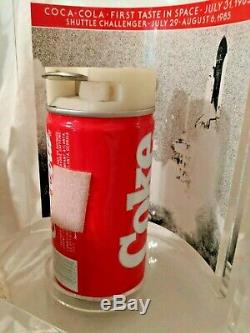 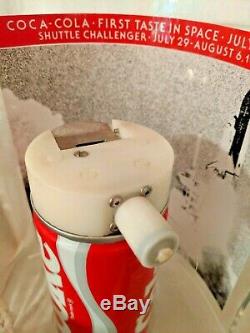 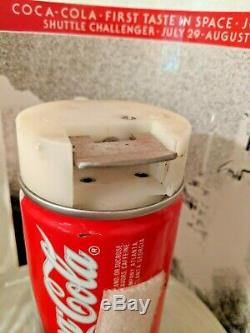 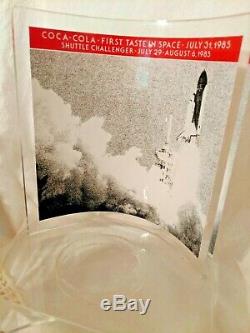 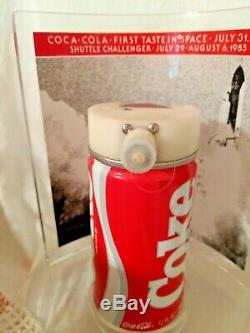 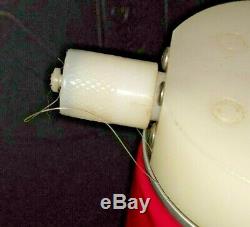 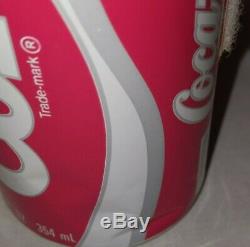 This listing is for a Coca-Cola Space Astronaut Can and Display. Coca-Cola First Taste in Space Shuttle Challenger Space Can. The same style of can and apparatus that went to outer space on the shuttle Challenger in 1985. It was offically called a Carbonated Beverage Dispenser Evaluation payload or CBDE. The condition is pre-owned estate item and this can has small marks, dings, dents and scratches it has been on display.

The most extreme dent is shown in pic at base of white stripe. We have not attempted to clean so this is surface dirt/dust/ smudges. There is a small line (like fishing line) that attaches to the nozzle cover so when removed the small cover is not lost (assuming it would float around in space).

This may be difficult to see in the pics but it is still in place. The is a small notch that holds the metal level up and moves to allow for the lever to be depressed. The can weighs approx 12 oz.

But when shook it does not appear to have any liquid inside. The plastic plexi glass stand is in good condition with light wear including surface scuffs and scratches especially to the base. The stand depicts the Launching of the Challenger and reads. Coca-Cola First Taste in Space July 31, 1985. Shuttle Challenger July 29-August 6, 1985. The can measures approx 5 1/2 tall 3 1/2 wide including nozzle. The stand measues base measures apprx. 8" x 5 7/8" the height is approx 8 3/4. These fully-functional cans were provided with a custom lucite base, including a screened photo of the Shuttle Challenger launching and the words, Coca-Cola First Taste In Space - July 31, 1985, Shuttle Challenger - July 29 - August 6, 1985. This was obtained from the estate of engineer at Lockheed with quite a few other unique items. The soda maker flew its carbonated drink on three space shuttle missions, each time trying to solve one important challenge: keeping the bubbles inside rather than out. This was an historic moment and we have included some of the details we were able to find below. More information we found online.

Whereas later missions flew pressurized cups and bottles together with a wall-mounted dispenser, the first time that Coke flew in space was inside an off-the-shelf aluminum can topped with a metal valve that the astronauts opened with the press of a button. Unfortunately, the can didn't work out very well.

In addition to the soda being warm (the shuttle was not equipped with a refrigerator for food products), the carbonation escaped, leaving the crew with flat drinks. On the upside, floating "soda balls" became a source of amusement for the astronauts. In 1984, Coca-Cola Company developed a can that could be used in space.

This is an exact replica of the can that was launched aboard the Space Shuttle Challenger STS 51-F mission, on July 12, 1985 so that the Astronauts could consume fountain drinks in a weightless environment! It has been reported that 200 +/- of them were combined with the Lucite Display base for presentation to various Coca-Cola Bottlers and Managers around the globe as a memento of the historic event! The details of the can, including the spout, the lever which was pressed down to release the soda, a simple locking tab (pencil) which can be moved with the thumb. It prevents the lever from being accidentally pushed.

There is a piece of white Velcro attached to can so that it could be held in one place inside the shuttle. One of these is on display in the Moving Beyond Earth exhibition at the National Air & Space Museum in Washington, DC. STS-51F, launched 5:00:00pm ET on July 29, 1985, was the 19th flight of the Space Shuttle and the 8th for the orbiter, Challenger. The mission also marked the second flight of Spacelab, a reusable laboratory mounted inside the payload bay. A major objective of the mission was to verify the performance of the Spacelab systems with the orbiter as well as to measure the environment created by the vehicle in space.

In addition to Spacelab, the Shuttle also carried several secondary payloads including the Carbonated Beverage Dispenser Evaluation (CBDE). CBDE was designed to evaluate packaging and dispensing techniques for space flight consumption of carbonated beverages. The experiment included specially-designed soda "cans, " produced by both Pepsi and Coca-Cola.

Unfortunately, the crew classified the experiment as a failure, due to the zero-g environment and the lack of refrigeration -- but, on the lighter-side, floating "Pepsi balls" did provide a source of entertainment. In 1985, Coca-Cola and Pepsi were launched into space aboard the Space Shuttle Challenger on STS-51-F. The companies had designed special cans (officially the Carbonated Beverage Dispenser Evaluation payload or CBDE) to test packaging and dispensing techniques for use in zero G conditions.

The experiment was classified a failure by the shuttle crew, primarily due to the lack of both refrigeration and gravity. The "Coca-Cola Space Dispenser" (Fluids Generic Bioprocessing Apparatus-1, or FGBA-1) was designed to provide astronauts the opportunity to enjoy Coca-Cola and Diet Coke in the weightless environment of space, and to provide baseline data on changes in astronauts' taste perception of beverages consumed in microgravity. It held 1.65 liters each of Coca-Cola and Diet Coke.

An astronaut would dispense the carbonated drink of choice into a "Fluids Transfer Unit" or sealed drinking cup through a quick connect on the dispenser. To save power, the dispenser would chill the liquid on demand via cooling coils between the storage container and the quick connect fitting. The FGBA-1 and 18 of the "Fluid Transfer Units" flew aboard the Space Shuttle Discovery in 1995.

(STS-63) Further development led to a Coca-Cola fountain dispenser (Fluids Generic Bioprocessing Apparatus-2 or FGBA-2) intended as "a test bed to determine if carbonated beverages can be produced from separately stored carbon dioxide, water and flavored syrups and determine if the resulting fluids can be made available for consumption without bubble nucleation and resulting foam formation". This unit dispensed Powerade sports drink in addition to Coca-Cola and Diet Coke. This unit flew on STS-77 aboard Space Shuttle Endeavour in 1996.

Unfortunately, the FGBA-2 did not work as expected. It will be well packaged with bubble wrap and styro peanuts when needed. We can't fix something if we are not aware... We do try to be as accurate as possible when listing. Thanks for Shopping on E-Bay!

We will need detailed photos of any damaged items included with your initial notification. The item "COKE COCA COLA Space Can Astronaut Challenger Spacelab 1985 display CBDE RARE" is in sale since Thursday, January 30, 2020. This item is in the category "Collectibles\Advertising\Soda\Coca-Cola\Cans". The seller is "gadawgbooks" and is located in Atlanta, Georgia.