Labi Siffre I Can Lead You, You Can Lead Me ACETATE 7 VERY RARE ONE OFF 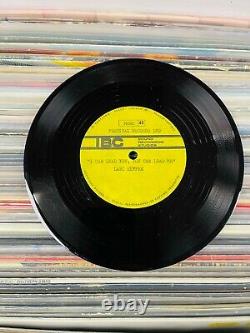 Super Rare One off issue ACETATE. Some light markings and overall in VG condition. Acetate discs are used for the production of records. Unlike ordinary vinyl records, which are quickly formed from lumps of plastic by a mass-production molding process, an acetate disc is created by using a recording lathe to cut an audio-signal-modulated groove into the surface of a lacquer-coated blank disc, a real-time operation requiring expensive, delicate equipment and expert skill for good results. [2] The disc is then coated in metal, which is then peeled off to form a negative that will later be electroplated and peeled to create a mother (positive copy) which is then again electroplated and peeled to create negatives called stampers, which are then used as molds in a record press.

In addition to their use in the creation of masters, they were widely used for many purposes before magnetic tape recorders became common, and in the modern era they are used by dance music DJs. They were used in radio broadcasting to archive live broadcasts, pre-record local programming, delay network feeds for broadcast at a later time, and provide programming "from home" on the Armed Forces Radio Network.

They were used extensively in Jamaica by sound system operators in the late 1940s and 1950s. Acetates were often used as "demos" of new recordings by artists and record labels. Some acetates are highly prized for their rarity, especially when they contain unpublished material. This item is in the category "Music\Vinyl Records".

The seller is "musicnostalgiauk" and is located in this country: GB. This item can be shipped worldwide.