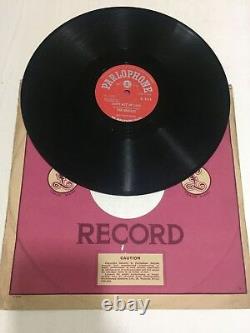 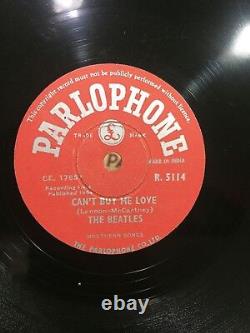 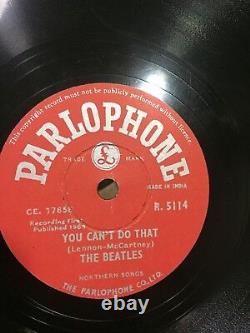 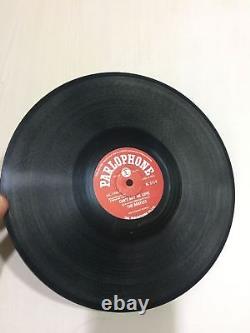 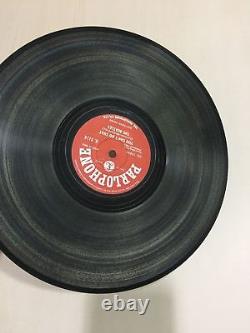 WE CAN PROUDLY & HUMBLY : SAY THAT NOBODY'S GOT WHAT WE HAVE. AS PER OUR ESTIMATES & EXPERIENCE, THERE IS HARDLY ANY BEATLES 78RPM RECORD STILL SURVIVING IN INDIA! SO WHAT WE GOT IS ALL THAT IS THERE.

PLEASE DO NOT DELAY IN GRABBING THE LAST REMAINING VESTIGES OF THIS RARE GEM. If you ask any Beatles aficionado, he will tell you the true value of this vinyl! It is a very very rare piece of Beatles memorabilia, And if you own it then you will be a part of a'select few' in the world!! THIS'RED PARLOPHONE LABEL' RECORD IS VINTAGE! THIS IS A SUPERB PIECE WITH GREAT VALUE!

The record has the original Parlophone Sleeve, which makes it even more special. If you are a collector or have been following the Beatles discography, I need not explain to you the worth of this record. Its value is shooting by day by day as it becomes rarer & rarer.

It is so rare that some people even haven't heard they exist anymore. "DEAD AS THE DODO" is what some expert say! "EXTINCT AS THE DINOSAUR" is what others say!! BUT THIS IS WHAT I SAY.

Country: MADE IN INDIA by The Gramophone Company of India Ltd. Record Condition: EX+ (Shiny surface) Amazing condition wrt its age! Label too is near perfect! Sleeve Condition: With Seam Splits & little worn & torn (pls see pics). Packing: Will be most secure to protect the vinyl from any transit damage. Please feel free to ask any questions & I will be happy to clarify all your doubts. History of The Indian 78s - Why are they valuable?? India was one of three countries known to have been pressing 78's when the Beatles came along -- the Philippines and Argentina being the others.

All of the 78's are scarce to rare, with the later singles being hardest to find. According to a recent book on collecting original UK pressings, the Indian pressings not only exist, but supposedly there were 30 or so different titles issued!

The story goes (the author appears very knowledgable on all aspects of the UK pressings) that when Parlophone decided in March of 1963 that they would stop producing 78's, they dismantled the machines and sent them to India, of all places. The demand for 78's still existed there since the records could be played on phonographs that did not require electricity and most Indians didn't have electricity. Beginning in the summer of 1964, the Indian branch of Parlophone not only pressed the 45 rpm format of Beatles singles, but also released identical issues on 78 format. By the mid 1960s the 78rpm record had become a scratchy memory in the world of recorded music. The tenacity of this format in some markets however resulted in some of the most unusual and unexpected releases ever. Great Britain's EMI records continued to issue 78s in India until at least 1968, legend has it due to the preponderance of wind-up phonographs there. Among those are a number of releases by the Beatles on Parlophone. The earliest of these featured a red Parlophone label.

Parlophone switched to a black label in 1965. These releases carried both the standard (UK)'R' numbering series as well as DPE prefix releases with different couplings than that of the standard Parlophone UK issues. Similar to the situation with vinyl 45s in the USA today, EMI also released 78s in Argentina and the Philippines for radio stations and juke boxes, many with unique combinations of songs. Why is this particular record more valuable?

Parlophone issues Indian 78' s in three label variations. " at the top and "THE PARLOPHONE CO.

This is the most antique piece which commands highest value! These are some comments for Indian Beatles 78 rpm records. "I can only recommend these records to a rich completist or a collector with very good Indian contacts". "The original cost of these 78 were a few Pence but its current value is incalculable".

The item that you have would have been issued by the Parlophone's Indian branch in late 1963. Parlophone is of course a part of the EMI organisation, and EMI typically seems to have released almost all of its British output in India to match the releases back in the UK. Because the track in question, She Loves You, was one of the most well known Beatles' songs, it would no doubt demand a premium price. Special Instructions on the playing of this record.

If you've just spent hundreds of dollars on such a rare piece, the last thing you should ever do is play it with a stylus, er, needle, that looks like a rusty roofing nail. The big rule here is NEVER, and I mean NEVER play your 78s with the same stylus that you play modern LPs and singles with. Likewise NEVER, and I mean NEVER play your LPs and singles with the same stylus that you play 78s with. They both need two very different type of styli. The reason is that modern LPs and 45s, apart from being made of a very different type of material, are mastered using a technique called microgroove. With microgroove, the grooves are actually smaller than that on a 78. While LPS require a styles of. 0007 of an inch, 78s require a stylus sized at 2.8 to 3.0030 thousandths of an inch, in other words, about 4 or 5 times BIGGER!

Therefore, playing a 78 with a stylus designed for LPs will result in poor sound reproduction. You'll lose that wonderful feel that is the sound of a well maintained rapidly rotating record -- plus you'll wear that stylus down to a nub in no time! If you play your LPs and 45s with the stylus designed for 78s, you will actually wear the down the walls of the grooves and destroy the disk because that stylus is actually much much wider than the groove it playing! I hope you are not too exhausted at the end!! The only purpose for this detailed listing & information is to apprise you of the true worth of this vinyl.

As a collector in India, I would like to say that one rarely come across such a marvellous piece. Especially so as Indian records were never seriously collected or preserved, which adds a great deal of value the last few ones'surviving. Please be free to ask us any questions you might have. THANKS A LOT FOR VISITING US!!! This item is in the category "Music\Vinyl Records". The seller is "bollywoodshoppe" and is located in this country: IN. This item can be shipped worldwide.